Motivate Kids To Maintain Value With A Trade-In Deal 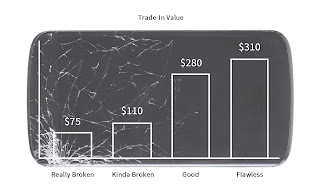 I remember the time my oldest son thrashed an expensive laptop shortly after I bought it for him. Man, did that grind my gears.

I made him pay for the replacement by garnishing his allowance for 18 months. The lesson stuck. That replacement lasted a very long time.

That was an effective, yet reactive measure to teach my son to take care of his possessions. A proactive measure would have been better. Less wasteful.

Fellow youth financial literacy advocate, Amanda Grossman, has an effective proactive solution. She expands on a shared skin-in-the-game technique David Owen wrote about in his book The First National Bank of Dad, which happens to be one of my favorite books on teaching kids the value of money (the other being Ron Lieber’s The Opposite of Spoiled). For the details on Amanda’s solution and some great David Owen quotes, check out her recent post: Genius Hack to Get Your Kids to Take Better Care of Their Belongings.

In short, the recipe is:

The key is to do this up-front, not after the fact. That’s what creates the incentive to take care of the item from the beginning.

As a concrete example, my youngest son and I just looked up the trade-in value of a 32GB Apple iPhone 7 on Gazelle.com. Here’s what we found:

It’s helpful to draw a bar chart to put the values in clear perspective.

To be honest, we were a bit surprised to see how much the broken phones fetched. I was hoping they’d be closer to zero to further bolster my point. Nonetheless, good to know in case his phone gets thrashed by an event beyond his control.

We both noticed the leap in value transitioning from broken to good. That’s the supporting point I was looking for. We discussed how the bar is probably pretty high to qualify for “Good” status and noted how close it was to “Flawless”. No cracks, no major scratches, no major scuffs. That can get pretty subjective, so best to shoot high when maintaining the phone’s condition. Music to my ears.

Looks like I won’t be needing to garnish my youngest son’s wages to replace a thrashed phone prematurely. Instead, he’s looking forward to a future windfall on a high value trade-in.