Keep Up The Good Fight With Kids And Chores 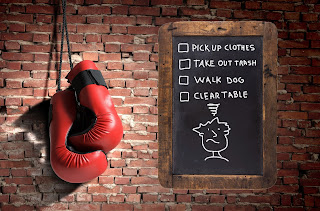 Are you struggling in the parenting trenches right now? Battling to convince your kids to do chores regularly, or to save patiently, or to give thoughtfully?

This excerpt from my conversation with Andy Hill on his Marriage, Kids and Money Show might give you some solace.

Andy: Some people are listening right now, and they’re saying:

“This is all well and good. It sounds like you guys have some kids that really want to help out. I haven’t even started asking my kids to contribute around the house. Where would I even start?

What would you say to that person?

Bill: So, first of all, let me disabuse you of the notion that my kids wanted to help out. I think what is really interesting and fun — now that most of my kids are in their twenties — is you realize that the good fight was worth it.

In other words, you think they’re not listening to you. You think the fact that they don’t pick up their clothes for the thousandth time is because you’re a crummy parent. You couldn’t convince them that work was important or to pull their own weight for the family.

Then they grow up and move away, and you start seeing the fruits of your labor.

Sometimes the messages are all getting through. They’re just not prepared or ready or mature enough to receive them. And then when they go out in the world and learn a little bit of what the world is about, you realize that all the messages are still floating around in there, and they start to land. And it’s really gratifying.

Being a parent is so humbling. I didn’t realize how stupid I was until I had kids. If I saw a kid acting out, my first reaction before I was a parent was:

“What’s wrong with that kid’s parents?”

And then, it turned out, I was the volunteer soccer coach whose kid was lying down in the middle of the field, pounding the grass, swearing at the referee.

“Hey coach, whose kid is that?”

And, now, that particular kid? (I’m not going to name any names, I’ve got 5 so I can hide it among them) He is one of the most thoughtful, caring individuals. (OK, I’ll give it away: he’s a dad now too.)

And there’s no reason not to hedge your bets anyway. So stick with it.

Andy: That makes me feel good for someone who’s in the trenches of it right now.