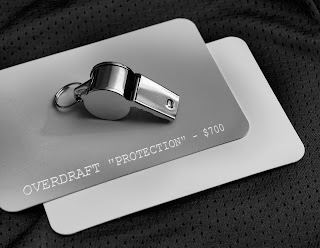 What’s worse? A little embarrassment at the checkout counter over a declined purchase, or a $30 hole blown in your bank account?

Money savvy teens will pick red in the face over red in the account every time.

Make sure your teen knows that overdraft protection is one of those things that sounds good, but really isn’t. You don’t have to take my word for it though. Listen to the director of the Consumer Financial Protection Bureau, Richard Cordray, who warns:

“Consumers who opt in to overdraft coverage put themselves at serious risk when they use their debit card.”

So, teach your kid how to opt out of overdraft protection to protect her balance instead of her pride.

Unfortunately, most kids don’t get the overdraft protection memo until after college. In fact, some college kids pay as much in overdraft fees annually as they do on books.