Find The Best Age To Give Your Kid A Prepaid Card 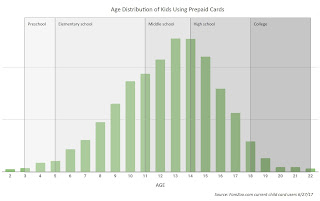 A prepaid card can be a great option for kids just learning the money management ropes.

It’s smarter than handing over your own credit card.

And the more innovative cards include some great educational features — like parent-paid compound interest.

But what’s the right age range for kids to be using prepaid cards? Data from our family finance site yields some insight.

Check out the chart above. It shows the current age distribution of children using FamZoo cards.

The sweet-spot is near the boundary between middle school and high school. Makes sense.

Since most card offerings require the legal cardholder to be at least a teenager, you may be wondering how so many kids in the chart can be under 13. In the pre-teen case, kids use what we call “on behalf of” cards. The parent is the legal cardholder, but the card is dedicated to the child’s financial activity. Here’s how it works.

After the early teen years, usage ramps back down again through the end of high school and into college.

That said, even as older kids transition to traditional bank accounts, many retain their prepaid cards to keep a collar on discretionary spending and coordinate with parents throughout college.

In fact, usage can extend beyond college too. As Monte, a FamZoo reviewer on Facebook, points out: “Not just for children! FamZoo [prepaid cards] have helped my fiance and I use the envelope method for budgeting on hobbies. With a weekly allowance we can save, donate, and spend guilt free money all within a shared budget.”

Whether used as training wheels for youngsters or a budgeting tool for oldsters, prepaid cards are becoming an increasingly familiar fixture in the standard money management toolbox.

Maybe it’s time to get one for your kid.

Teach Your Young Gamer To Budget

But you already knew that. You recognize the names in their transaction alerts: EA, Minecraft, Roblox, Steam, Blizzard, Riot Games, XBox, G2A.

You may already know that too. If not, check out sites like realmstock.com — a marketplace for trading in-game items.

But did you know kids are even paying money to watch other kids play online games?

Yep, that’s a thing. Check out Twitch. Find a live streamer. Look for the subscribe button (probably upper right), and check out the options. Kids pay to get badges, emoticons, ad-free viewing, and other “benefits”.

In fact, one 14 year old FamZoo cardholder paid a total of $134.97 in the last 30 days watching other gamers game. Yikes.

Why do I know this? A Monday article piqued my interest in what kids are spending on gaming these days. The Wall Street Journal reported that gaming providers like EA are charging less for the games themselves while reaping huge profits from the little microtransactions inside the games.

And just how much are gamers spending on in-game microtransactions? A mind-blowing $71 Billion worldwide in 2016. That rivals the entire GDP of Cuba!

The article prompted me to dig into the FamZoo data around gaming related transactions by our child cardholders. That’s what alerted me to the Twitch trend mentioned above.

Obviously, gaming companies smell a profit opportunity with our kids.

Me? I smell a financial literacy opportunity.

Try this with your young gamer:

You might even consider a separate prepaid card dedicated to online gaming. Load it each month with the agreed-upon budget. Any attempts to overspend will be harmlessly declined.

So, whether your kid is paying for games, paying for do-dads inside games, paying other gamers to game, or all of the above, you need to get your head in the game as a parent. Know what your kid is doing. Then, use your kid’s gaming habit as an opportunity to pass along some critical personal finance basics. 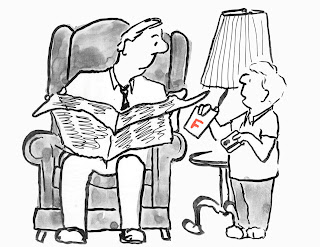 Kids aren’t making the grade when it comes to successfully transacting with prepaid cards.

Just take a look at these stats from FamZoo cardholders.

I sampled kids from active families who have:

Here’s how the kids break down by purchase decline percentages, which I bucketed into subjective grade levels:

I’ve written before about the 6 month Zero Decline Challenge as a test for bank account (or credit card) readiness. The good news is 19% of the kids from this sample are at least half way there. But the majority are nowhere close, with 19.7% flat out flunking.

I’ve also suggested assessing a parental overdraft fee as a way to curb declined transactions. It looks like the Bank of Mom/Dad would be clawing back a ton of fees from these kids!

But maybe you’d rather offer the carrot instead of applying the stick. A reward to encourage the good behavior instead of a penalty to curb the bad.

If so, consider paying out a bonus for making the grade each month. Of course, it’s your call as to which grades warrant a bonus and how much, if any.

After mastering those points, your child will be on the road to an easy A+.

Whether you opt for the carrot, the stick, or just a discussion when it comes to declines, make sure to pay attention. Ignoring bad habits won’t improve them. Turn on card activity alerts to detect declines right away, and coach your kids in real time.

Posted by Bill Dwight at 5:55 PM No comments:

Get Your Kid A Just-In-Time Card For Smarter, Safer Spending 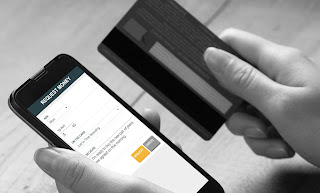 More and more parents are ordering “Just-In-Time” spending cards for their kids.

What are those? Prepaid cards used only at the moment of purchase.

Here’s how it works.

Normally, the balance on the Just-In-Time card sits at zero. Earnings from a kid’s chores, odd jobs, allowance, or part-time work accumulate in a separate short-term savings bucket. That savings card or account is never used for purchases directly.

When the child wants to make a purchase, she:

Once notified of the purchase, the parent can return any remaining funds to savings and bring the Just-In-Time card balance back down to zero.

With the latest app-driven card offerings, the cycle can be competed in real time with just a few taps on a smartphone. More often than not, requests from my kids are sent, received, and approved (or not!) while waiting in line at the register.

Why bother with the Just-In-Time card two-step at all? Four solid reasons:

With a Just-In-Time card, moving money at the very last moment will help your kid hold onto money over the long haul.